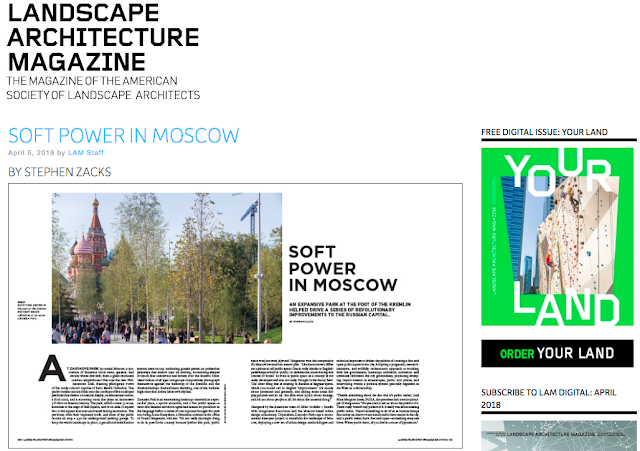 Soft Power in Moscow: An Expansive Park at the Foot of the Kremlin Helped Drive a Series of Revolutionary Improvements to the Russian Capital. Landscape Architecture Magazine, Apr. 2018.

An open question is whether improving living conditions and beautifying public squares in Moscow will neutralize the opposition or prove the potency of civic action through direct engagement and cooperation with the government. Russian architects tend to deflect political questions, taking a pragmatic approach to accomplishing what they can within the existing system: Do what you will, but stay out of politics. The most telling response to questions about the ethics of working with the Putin regime was that the government could be much worse.

In March, Putin was expected to be elected to his fourth term as president with little to no opposition. Meanwhile, in the United States, the Trump-Russia probe continues to unwind interference in the 2016 presidential election. Russia continues to occupy parts of Georgia and Ukraine and jail opposition leaders, and covert Russian propaganda has extended a broad, right-wing authoritarian influence in the Soviet Union’s former satellite republics. “Unfortunately, it’s kind of boring in a way,” Renfro said of the politics of working in Russia. “Maybe that in itself is interesting, that within the tumult of what’s going on at the national or international level [in] geopolitics, a project like this could fly under the radar. It’s a testament to how much the world is still working normally, and cooperatively and experimentally together.”