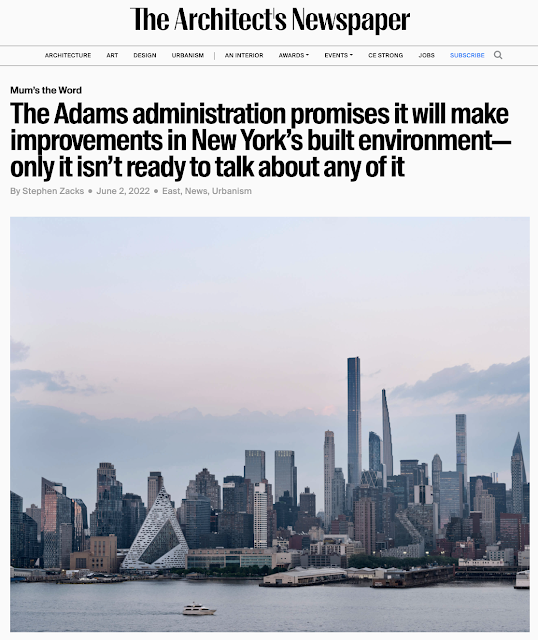 The Adams administration promises it will make improvements in New York’s built environment—only it isn’t ready to talk about any of it, Architect's Newspaper, Jun. 2, 2022.

Judging by the halting responses of various press offices within the newly formed mayoral administration of Eric Adams to a basic question about its infrastructure priorities, I fully expect that in a matter of weeks New York City will collapse into a pile of fiery debris: Its bridges will fail; its subways will be permanently inundated by stormwater; and its residents, having taken to homemade rafts, will begin scavenging for food, water, and shelter. More patient, less alarmist observers suggest the mayor’s staff simply don’t know how to answer the question yet.

That said, clues to the intentions of the Adams administration for better governance can be found in a couple of places, including a plan for economic recovery released by the mayor’s office in March, a two-pager shared by the Department of Transportation (DOT), and a trickle of information from other sources.

Suggestions offered by former mayoral staffers, scholars, and expert practitioners could also help guide infrastructure policy toward a more ecological, equitable, and beautiful city (if it’s still standing). We gather from Thaddeus Pawlowski, who worked as an emergency planner for the city in Bill de Blasio’s administration, that the former Mayor’s Office of Climate Resiliency is being renamed the Mayor’s Office of Climate and Environmental Justice to combine several offices under a single umbrella. Crucially, the office will also be placed under the oversight of the Department of Environmental Protection (DEP), which has substantial capital budgets.

The appointment of top-level officials hailed as smart and competent, such as Rohit T. Aggarwala as DEP commissioner, has also created a sense of optimism among outside observers like Pawlowski. (Initial missteps by the Adams administration, including the hiring of Bernard Adams as director of mayoral security, and the bulking up of police presence on public transit, were deflationary, to say the least.) However, none of these officials were made available to speak to AN after dozens of queries, nor were any current agency staff members, though three deputy mayors and an acting Department of Buildings commissioner spoke at a breakfast sponsored by the New York Building Congress in early April.