On Architecture Schools and Professional Practice for Oculus 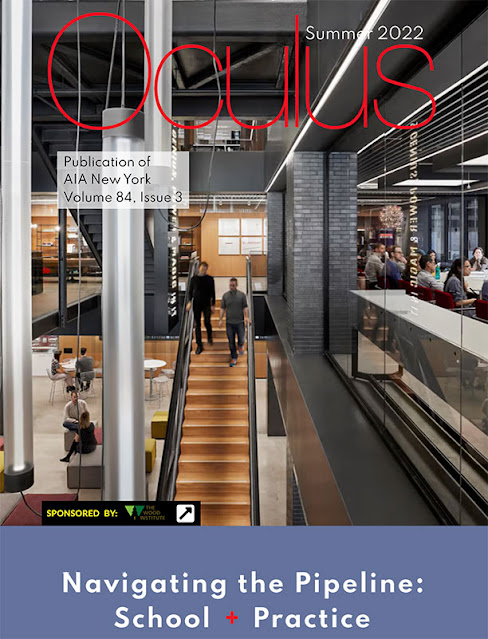 The Pipeline: Are Employers' Needs Being Met by Architecture Schools? Oculus, Summer 2022.

The work culture and technological needs of the architecture office have noticeably changed in recent years, and it’s worth asking if architectural education has kept up with the profession. It’s not just the rupture of the pandemic, which gave greater credibility to concerns about the health and well-being of everyone, shifting the ground under architecture’s traditionally exigent office culture and requiring increased sensitivity on the part of bosses. And it’s not just office workers, interns, and recent graduates whose labor environments have been affected. The value of living happily, protecting a healthy work/life balance, promoting diversity and equity in the workplace, and limiting the potential harm caused by the stereotypically competitive, sometimes cutthroat field: these points of contention, consciousness-raising, and demand on the part of students and labor organizers have spilled over into a more general reassessment of the limits of professional ambition in the business of architecture.

Gone, to a large extent, is the assumption that all-nighters, endless workweeks, unpaid internships, and uncompensated overtime are normal occupational hazards one must inevitably endure to prove one’s love, passion, and desire for advancement. The real scandal of architectural historian and theorist Marrikka Trotter’s statements during a SCI-Arc panel in March about the exploitative work environment students can expect is that she was describing an accepted norm, up until very recently, and one that still persists widely. To borrow a phrase from the journalist Michael Kinsley, a gaffe is what we call it when someone accidentally tells the truth.

Meanwhile, some architecture firms are asking questions that go against the grain of these cultural trends: Are architecture schools adequately preparing graduates for professional practice? Why are students not trained to be proficient in Revit, for instance, when it has become the standard tool required by design offices—especially large ones with complex projects involving overlapping specializations and contractors? These concerns lead to the long-standing question about the role of architectural education: Should it prepare designers to be attractive hires for practical office work, able to enter into production on building projects immediately? Or should it equip them with a deep, critical knowledge of architecture, its history and possibilities, stimulating them to use their imaginations beyond production of built environments?

“People have complained back and forth since the first departments of architecture were established in the U.S.,” says architectural historian and SCI-Arc head of research Erik Ghenoiu. “William Ware at MIT and then at Columbia fought for intellectual training, and the practices protested, but then later didn’t like it when they got students who were not generally educated. Professional practice is no longer the only solution for architecture education. We graduate many more students than are needed in the industry, and we need people who can move fluidly between scales and types of practice from architecture to startups to gaming to policy. Providing that is a better service to the students, giving them access to a broader way to define their careers.”