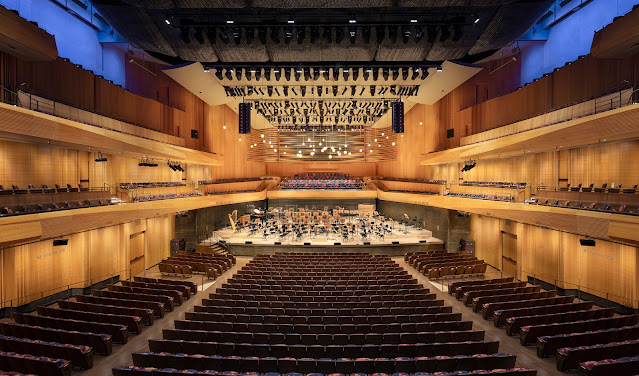 A visually arresting space originally designed by Max Abramovitz, the home of the New York Philharmonic has always been impressive. In her New York Times review, Ada Louise Huxtable celebrated how its tapered travertine-faced columns and delicate curves express the structural forces of their concrete loads to form elegant arcades. With the caveat that it needed to perform acoustically—and the jury was still out—Huxtable appreciated how the interior came to life during intermissions, with audiences visible through the glass-walled foyer and tiered promenades, bringing a “stream of animation and color” to the city.
It was a civic monument, for sure. In 1962, the philharmonic was the first building to open to the public at Lincoln Center for the Performing Arts, comprising the New York City Ballet, the Metropolitan Opera, the New York Philharmonic, and Juilliard School of Music. But Huxtable’s caveat about the acoustics was either a premonition or an already whispered rumor. Its sound quality was poor, and it remained infamously troubled through a series of renovations, including a reconfiguration of the balconies and dampers in 1970, a reconstruction of the entire hall in 1976, and another minor effort in 1992.
This time the demolition went even further, carving back the walls within the former Avery Fisher Hall and practically building a new structure inside its footprint. Judging by the orchestra’s exquisite preview rehearsals and its opening day performance, they finally got it right. Principally designed by Toronto-based Diamond Schmitt—responsible, most notably, for a center for the Canadian Opera Company in Toronto in 2006, the Maison Symphonique de Montréal in 2011, and the Mariinsky II opera house in St. Petersburg, Russia in 2013—with Tod Williams Billie Tsien as public space subconsultants, and ultimately, close collaborators, the philharmonic now named for record-and-film magnate David Geffen was extensively tested in advance by acoustic engineer Paul Scarbrough of Akustiks using the latest sound modeling technology.