On the Cosmological Implications of Early Galaxies for Architecture for Domus 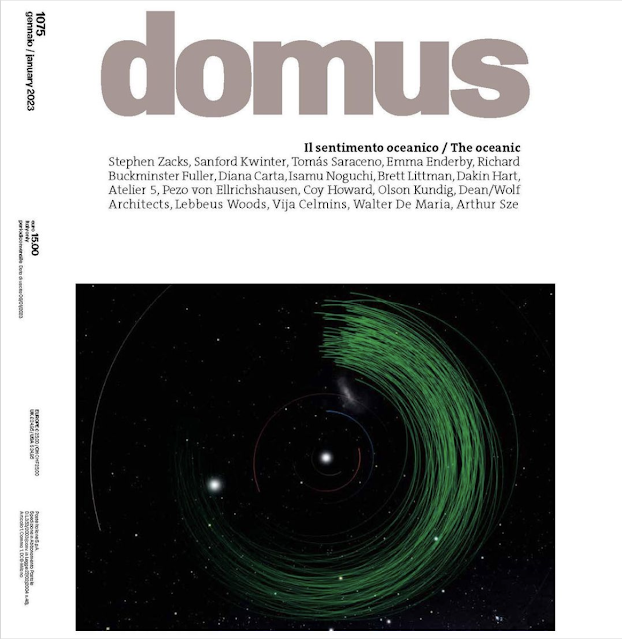 On the Cosmological Implications of Early Galaxies for Architecture, Domus, Jan. 2023.

Renderings of the universe’s early galaxies produced by the James Webb Space Telescope communicate an uncanny perspective on time and space that should be as eventful in the history of humanity as images of the earth seen from space generations ago. In the Critique of Pure Reason, Immanuel Kant took Newtonian physics as an inspiration for thinking systematically about the nature of consciousness, examining its underlying rational principles, which became a founding inspiration for the European Enlightenment. The disruptiveness of the theory of heliocentrism and extraplanetary worlds to the prevailing social and political order led to the persecution of people like Galileo and Giordano Bruno as heretics during the Italian Renaissance, imprisoned, the latter tortured and burned at the stake.

The method of observation, theorization, prediction, and testing they employed would usher in a revolutionary modern epoch of science, technology, political organization, and social life. We should regard the Webb images with a similar impetus: to take in as a civilization, spiritually and cognitively, the unfathomable dimensions of space-time grasped by a physics that can render as full color images light reaching us in the present from 13.5 billion years ago, 350 million years after the Big Bang. It should influence how we design and build.

Eco-cosmological design may re-center humanity on planet earth as a primal experience of the environment and a spiritual gift of being in the universe. Reminiscent of ancient pyramids, mosques, temples, pilgrimage sites, and stepwells, architecture can return us to the concept of the godhead as an agent of renewal of the universe each day, conscious of the gracious return of sunlight as a life-giving force, where we engage in seasonal celebrations common to every culture and revere the plants and animals we live among, which feed us and spare us from destruction.

As the population of humanity surpasses eight million, we can see signs of the terror a poorly organized infrastructure may bring: mass starvations in drought stricken territories, millions of refugees fleeing inhospitable habitats, drowning at sea and expiring in the desert, mass shootings, which are like preparations for a dimming of moral feeling, people packed in alleyways and concert halls suffocated by a sudden fear of being trapped, islands erased by tropical storms, arctic villages disappeared in the melting permafrost, entire ecological systems collapsing. In the vast movement of particle, accelerated indefinitely by industrial production, we need to pay attention to bodies of all kinds.