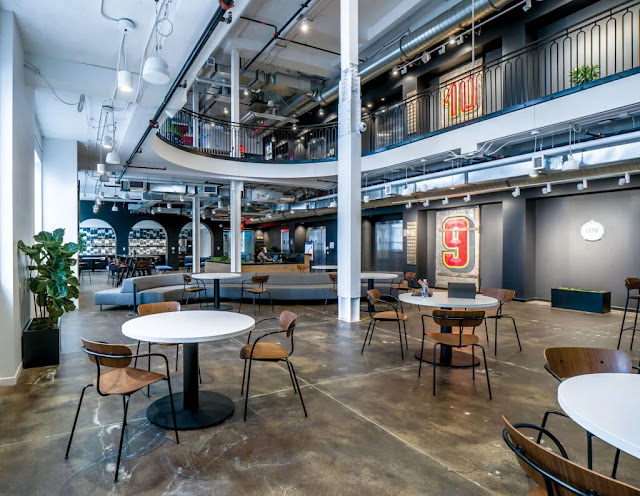 British advertising agency WPP, the largest firm of its kind in the world, has been on a mission to refresh its image and consolidate its offices across the globe. The latest of these projects gathers an assortment of WPP-owned agencies and companies in Detroit and its suburbs under one roof in the downtown Detroit neighborhood of Greektown. For a new home WPP selected the ten-story Marquette Building, which was designed in 1905 by Rogers & MacFarlane in what was then Detroit’s Financial District as a steam-heat-generating plant. To modernize the looming brick building, WPP tapped the New York office of London-based architecture firm BDG architecture + design, which developed a plan to revamp the building’s interior and transform it into an office that could accommodate all 1,200 of WPP’s employees in the Detroit area.
WPP took on its sprawling multinational form through the acquisition of dozens of smaller companies, including ad agencies J. Walter Thompson and the Ogilvy Group in the late 1980s. It now employs 130,000 creatives in more than 100 countries. In recent years, it accumulated so many marketing, branding, PR, tech, and commercial entities spread among countless offices that it had begun to identify itself more as a holding company than a unified brand. As part of an ongoing mission to streamline operations and clean up its own image—partially a response to questions about the ethics of working for oil corporations and lawsuits against some of their fossil fuel clients like Chevron for misrepresenting themselves as sustainable—WPP has been purchasing older buildings and adapting them for use as energy-efficient, “on-brand” headquarters.
...
The move is another step in a moment of extraordinary change for downtown Detroit. A flood of 1,000 new office workers will utterly transform the environment of that corner of the city, yet the public transportation infrastructure lags far behind, bringing a daily onrush of automobiles and customers for local businesses that have survived. If the city can keep up, adapt, and spread the wealth, WPP’s new headquarters may turn out to be much more than a simple rebranding exercise.